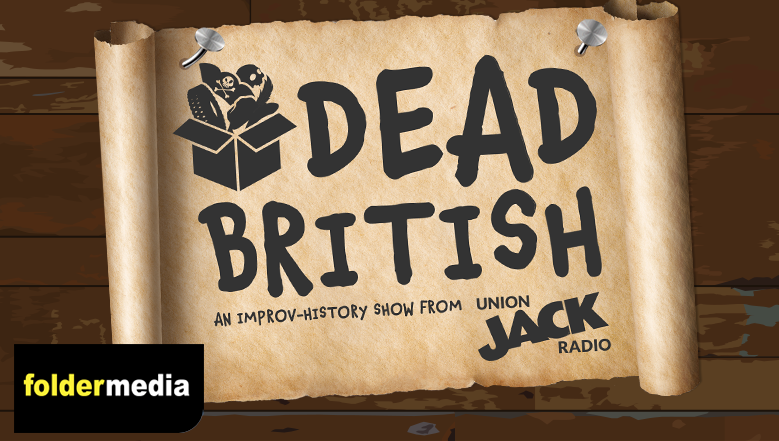 Created by production company Folder Media and featuring a wealth of improv talent including The Maydays, one of the first majority-female improv companies in the UK, Dead British is a unique interview show featuring a range of characters from British history. One brave improviser will be tasked with playing a famous character from British history, without knowing in advance which person they are playing; while the interviewer knows exactly which character they are about to interview. Backed by a cast to assist the interviewee, the show will feature probing questions, improvised historical flashbacks, and impromptu original songs to illustrate the improvised living biography of each featured historic character.

This improvised hour of comedy, which was produced in Nottingham in front of a live audience, combines the feel of a chat show, along with elements that wouldn’t be out of place in a game show like “Mr & Mrs”. Since 1988, the amount of improv across the UK has vastly increased, whilst the broadcast coverage has not – something that Folder Media and Union JACK Radio, funded by the Audio Content Fund, has set out to change with this unique series, which will feature quality content from award-winning, internationally-renowned improv artists.

Dick Stone, Group Content Manager for JACK Media, which owns Union JACK Radio said: “Despite featuring a wide variety of brilliant new and classic comedy, Union JACK Radio hasn’t previously featured improv as a genre of comedic performance. Until now! We are so excited to partner with Folder Media to give this incredible and innovative series a deserved home on national radio.”

Lloydie James Lloyd, Producer of Dead British for Folder Media, added: “Improv has rarely featured on radio to a significant degree, and there has been little investment in this growing art form. Together with Union JACK Radio and talent including improv company The Maydays, we have created a compelling new piece of quality radio comedy that we can’t wait to now share. Dead British is different to anything else currently available on British radio!”

Union JACK Radio has made a name for itself broadcasting only the best of British music and comedy, with partnerships and collaborations established across the comedy industry to deliver some of the most ground-breaking comedic content that can be heard on national radio today. It has collaborated with and featured some of the nation’s best comedic talent, from Ed Byrne, Omid Djalili, Basil Brush and Marcus Brigstocke, to Jared Christmas, Brian Blessed, Josie Long and Shappi Khorsandi, whilst also nurturing newer talent, such as Josh Berry, whose hit show ‘Josh Berry’s Fake News’ was created especially for Union JACK radio.

It Feels So Good by Sonique

Forever And For Always by Shania Twain
On Air