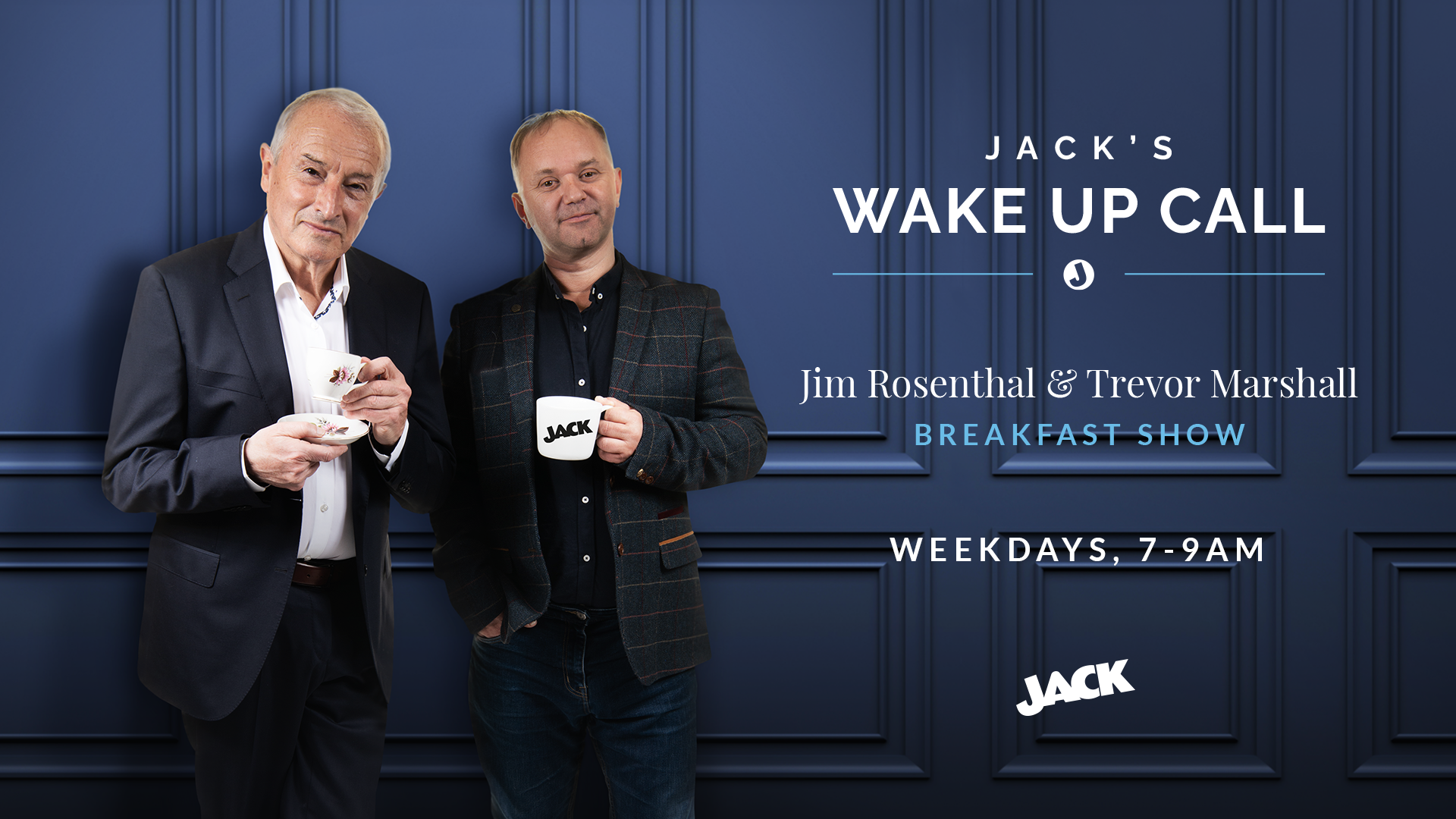 4 May 2021, Oxford: JACK Radio Group, one of the leading independent commercial radio broadcasters, can today announce that it has appointed multi-award-winning broadcaster Jim Rosenthal as the presenter of a brand-new Breakfast Show. JACK’s Wake Up Call can be heard across the Group’s three national and three regional radio stations – including flagship stations Union JACK radio and JACKfm – every weekday, 7-9am, from Monday 10 May.

Despite an incredible broadcasting career spanning over 50 years, this is the first time that Rosenthal has ever been lured to a national radio Breakfast Show. Presenting alongside another award-winning broadcaster, Trevor Marshall, the duo will cover a range of topics from sport and entertainment, to music and major events, while also showcasing the credible mix of British music and comedy that the JACK Radio Group has become best-known for. Jim will also be introducing contributions and interviews with a range of household name stars, thanks to the extensive list of contacts built-up throughout his career.

One of the most-loved and respected broadcasters in the country, Rosenthal is best-known for his high-profile presenting and commentary roles in the world of sport. His many presenting accolades include eight FIFA World Cups, seven Rugby World Cups, two Olympic Games and more than 150 Formula One races. He has twice been named as Royal Television Society’s Sports Presenter of the Year, and was the main anchor of ITV’s BAFTA-winning coverage of the 2003 Rugby World Cup. In 2019, Rosenthal took over the role as the main ‘voice’ of the JACK Radio portfolio, following the death of Paul Darrow, who had previously provided the voice.

Speaking of his new role, Rosenthal said: “Morning radio is an essential way to start the day for so many, so I’m excited to break new ground with a breakfast show that will be broadcast across six different radio stations, reaching almost half a million listeners. I started my broadcasting career in radio and I’m looking forward to making my return alongside my talented co-host Trevor Marshall.”

The JACK Breakfast Show will be heard across the three national Union JACK stations – Union JACK radio, Union JACK Rock and Union JACK Dance; as well as on the Group’s three Oxfordshire stations, JACKfm – where Trevor Marshall is the current presenter of JACK’s Morning Glory, which was recently nominated for Best Radio Show at the upcoming Radio Academy ARIAS - JACK2 Hits and JACK3 Chill. This will be the first time that one Breakfast Show has been broadcast across the Group’s full portfolio of radio stations, reaching upwards of 424k listeners every week and providing an unrivalled opportunity for advertisers wishing to reach an engaged audience of a more mature age demographic.

In a brilliant technological feat, the music that will be heard during the Breakfast Show will differ across each of the six stations, providing listeners with a completely bespoke service that enables them to enjoy the new show without compromising on their preferred style of music. For example, Union JACK radio, Union JACK Rock and Union JACK Dance, while all incorporating a great mix of British comedy, each feature a different genre of British music, which will continue to be the case throughout the Breakfast Show.

Ian Walker, CEO of the JACK Radio Group, added: “Despite the challenges that the last 12 months have presented, radio has boomed, becoming the medium of choice for people seeking a connection. Although RAJAR hasn’t been available to allow us to officially measure our audience, we have absolute confidence in our audio proposition and have seen record streaming figures across the JACK Radio Group.

“Jim is one of the best broadcasters in the country and offers a great blend of wit and personality that really resonates with our listeners. The launch of JACK’s Wake Up Call is another big development in the audio offering that we are delivering to audiences nationwide.”

Ghost Of You by Mimi Webb